The department was founded when Loy Mackey first moved to Oak Hill and was comforted by the fire hydrant located across the street from his house – until he discovered there was no fire department to use it. In September 1967, Mackey, along with Kermit Burrer and Bill Jackson, decided they needed to establish a fire department and started knocking on doors for donations. Read more.

The Oak Hill Fire Department spent 20 years using yellow apparatus at scenes. Here is the story behind the yellow trucks, which have been replaced with the more traditional red fire trucks. 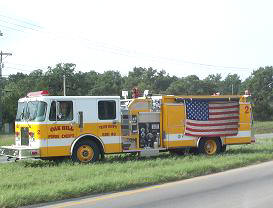 The weekend after the attacks on September 11th, Oak Hill members were out at the “Y” in Oak Hill collecting money for the families of firefighters and EMS personnel who died as a result of the attacks. Everyone was so generous, and as a result, the department collected over $35,000! The flag on Engine 2, shown above, was flown during the Vietnam War.

Pictures are courtesy of B.J. Wier