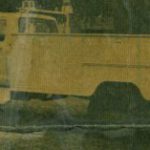 With Nearby Fire Hydrant, OHFD President Felt Safe, Until…

The following article, written by Frank Loftus, was published February 13, 1975, in the Hill Country News. The pictures are taken from the original article.

OAK HILL — When Loy Mackey first moved to Oak Hill, he was comforted by the fire hydrant across the street from his house – until he discovered there was no fire department to use it. In Sept. 1967, Mackey and two others, Kermit Burrer and Bill Jackson, decided they wanted a fire department and started knocking on doors for donations.

They were able to raise enough money to incorporate the department in April 1968. In June 1968, they were ready to buy their first truck but found that ready-made trucks were too expensive. They were able, however, to purchase an old military crash truck.

The hoses and other equipment needed repair, but the young department was able to get the work done, giving them their first operational fire truck.

The population of the area continued to grow and, in April 1969, they started trying to raise more money to buy more equipment. They were still relying on door-to-door soliciting and they also sponsored a rodeo and held benefit dances. Then, in Dec. 1969, they ordered a new truck.

In early 1970, it became apparent that new sources for money were needed. The old methods weren’t raising enough. They decided to charge an annual participation fee based on the type of building to be protected.

The current fee schedule charges $25 annually for a home, barns, and outbuildings over a certain size cost $10 and businesses are charged by square feet of floor space.

Participation fees are still the main source of money although the Ladies Auxiliary raises substantial funds which are used to purchase needed equipment.

The fire fighters are volunteer and receive no pay but the department pays for insurance on both men and equipment. There are other expenses to be met, including a phone system with one primary fire phone and seven extensions which cost over $100 each month.

In 1969, O. B. McKown Jr., a concerned resident, gave the department use of his own truck which had been modified for use as a fire truck. The department eventually purchased the truck from McKown.

In the autumn of 1973, the first truck was wearing out from considerable off-road use and was sold. It was replaced by a new one ton truck which the department converted to a pumper. The new truck first saw service fighting a grass fire on the Fourth of July 1974.

Because more fire hydrants have been placed in the area, the department is trying to sell the 6,000 gallon tank truck. The 1,400 truck is being used in its place. A two-ton truck has been bought and is being converted into a pumper by the fire fighters.

The Ladies Auxiliary has been invaluable to the department and all fund raising except for membership contributions is their responsibility. They have recently purchased a portable electric generator and extension cords and lights for fighting night fires and a large exhaust fan.

The ladies are also trained as fire fighters and are qualified to operate all the equipment possessed by the department. They can often respond faster and have the necessary equipment ready at the site by the time the men get there. They also provide food and drink for fire fighters who are out for extended periods of time handling grass and range fires. 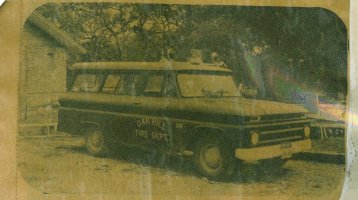 The Oak Hill Fire Department, along with other volunteer fire departments throughout Texas, are proof that concerned citizens can make their communities a better place to live if they care enough.